If you happen to chance on this blog you can find a lot of old posts about books I have read and a few more random things.

I stopped writing on this blog when my son became ill (see last post). I have started another blog now - a fresh start - if you would like to pop in at cornishamy.wordpress.com.

Circumstances mean that blog posts might be infrequent - so far I average one a year, which makes Donna Tartt look prolific - but I want to try to get it going a bit more. I'm sure I will write a fair bit about books, but I am also hoping to try to do some fundraising in the future relating to my son's condition. The new post going up soon will be a bit of background about this....
Posted by Amy at 3:39 pm No comments:

It is with regret that I wanted to let you all know that I won't be posting here for the foreseeable future.

Since having a baby in December I haven't really been able to keep up with reviews anyway. However, in a very short time everything has changed drastically as our son has been diagnosed with infantile spasms (a rare kind of epilepsy). As I need to focus on him, I won't be able to write here at least for a while.

It's horrendous to feel so powerless to help your child when they are ill. One of the few things I can do is share information about infantile spasms to help others recognise the symptoms quickly, so I'm including a link for further information here.

I've been doing a fair bit of late night reading still - in fact, the only time I am getting to read - on the Kindle.  I haven't kept up with writing about what I have read, so this is a brief catch up. As I'm not usually that alert at night, they have been fairly unchallenging reads.

"The Chimera Secret" and The Eternity Project," by Dean Crawford.

"The Chimera Secret" and 'The Eternity Project' are the latest novels in the series of novels by Dean Crawford which feature  Ethan Warner and Nicola Lopez.  I have read and enjoyed previous entries in the series, which I have reviewed here.

These novels continue the story arc, in which Ethan is looking for his journalist fiancée, Joanna, who was kidnapped in Gaza. Alongside this arc, each novel has it's own "monster of the week" storyline. In "The Chimera Secret" Dean Crawford draws on Bigfoot mythology, and "The Eternity Project" is of a more ghostly ilk.

These 2 novels form a satisfying conclusion to the story arc, and are so addictive that I went straight from one to the other (which I had not initially intended to do). I got the impression that "The Eternity Project" is intended to be the last book featuring this entertaining pairing, which is a shame.

"Up with the Larks: Starting Again in Cornwall" and "Seagulls in the Attic: Making a New Life in Cornwall," by Tessa Hainsworth.

As a Cornish girl who has relocated to Devon for love but still thinks Cornwall is better, I was attracted to these books for nostalgia reasons. I wanted to be reminded why Cornwall is better than Devon, and I was. These books are nice, gentle reads, set in a rural society which is gradually being eroded by declining fishing opportunities and the influx of retirees and second-homers which are pricing out the locals.  There is a 3rd in the series which I intend to read at some point, but maternity leave pay has resulted in a shortage of book-buying funds (and, indeed, anything buying funds).

"The Greatcoat," by Helen Dunmore

I think I've mangled the order of these a bit, as I think I read this just after "The Ghost Hunters" when I was still in the mood to be creeped out on late night feeds. It is the well-written tale of a new wife who moves into a flat with her husband and finds a greatcoat in a cupboard. Following this, she starts to be visited by a ghostly airman.  Well-written though it may be, I didn't find it creepy which means that it ultimately didn't work effectively for me as a ghost story.

"Guardians of Stone" and "Fountain of Secrets," by Anita Clenney

A random find on the Kindle Prime library; the first two novels in a relic hunter series described as Indiana Jones meets Janet Evanovich. I couldn't resist that combination.  I think ultimately the Janet Evanovich comparison came from a sex triangle vibe, but these novels didn't really have the sense of humour that I so enjoy in the Stephanie Plum series. They were an entertaining diversion for late night feeds, but I haven't yet decided if I enjoyed them enough to want to continue with the series.

"The Ghost Hunters," by Neil Spring

I discovered "The Ghost Hunters" through word of mouth on Twitter. When I was deciding what to put on my new Kindle to read while being kept awake at night by a young baby, this was one of my first picks.

In the framing narrative of Neil Spring's novel, Dr Robert Caxton receives a letter which summons him to the Senate House Library in London. Once there, he is given a mysterious manuscript that had been found in the collection of infamous ghost hunter Harry Price.  This document - written by Sarah Grey relating her time working with Harry Price, their relationship and their involvement with the allegedly haunted Borley Rectory - forms the main body of the novel.

I wasn't aware when I started reading this that Harry Price was a real person and Borley Rectory was a real, supposedly haunted, place. This added an extra level of fascination for me.  In the past I have been interested by the plays of Terry Johnson, who merges the real and fictional in his work, and where that demarcation point becomes blurred. However, where the historical figures that Johnson uses are well-known, even iconic - for example Einstein and Marilyn Monroe in "Insignificance" - I had no knowledge of Harry Price.  Spring's use of Harry Price comes with no iconic, recognisable character traits as far as I am concerned - unlike Einstein or Monroe, where public knowledge of the person forms a character shorthand - which also means it comes with no expectations or preconceptions.  Rather better known to me is Sir Arthur Conan Doyle, whose fascination with spiritualism was well documented, and who Neil Spring also uses as a character in his narrative.

Of course the real measure of a ghost story is how scary it is. It might be down to circumstances to an extent - reading in near darkness in the middle of the night - but it did effectively creep me out (so much so that I alternated it with another book when I got too freaked out to continue reading at night).  It is a bit of slow burn, quite M.R. James-y (which is a very good thing) and effectively builds suspense and foreboding. There was an element in the narrative that I didn't quite buy into and felt a little cheated by - I won't disclose what, as it would be a significant spoiler - but in the main I found it very satisfying and unsettling.

Neil Spring's novel has strong characters as well as a creepy ghost story to recommend it, with an element of verisimilitude. As well as reading the novel, I would recommend reading the fascinating author's note which relates events in the narrative to the details of the actual alleged haunting of Borley Rectory.

I am being a bit facetious and bitchy in this, but the fact does remain that - fun and entertaining as the books are - there is little character development and Stephanie's life still has not really moved on.  The mystery element might vary a bit for each novel, but the formula remains the same....

"The Magus of Hay," by Phil Rickman

This is going to be another quick catch up post. I lamentably have not got very far with my maternity leave reading, and have had little chance to read or blog since my rather screamy baby was born on Boxing Day. I did however finish "The Magus of Hay" just before he was born, and I am trying to perfect my one handed typing technique while supporting a 4 week old baby on my lap to start blogging again.

In "The Magus of Hay" Phil Rickman re-introduces two characters from his earlier novel "The Crown of Lights," artist Robin Thorogood and his sensitive - meaning psychic to an extent - wife, Betty. Robin is struggling to piece his life back after events in the earlier novel, and he impulsively decides that his new project should be opening a pagan bookshop in Hay on Wye.  Their lives then intersect once again with Merrily Watkins, deliverance minister, as they all get drawn into the intrigue surrounding the death of an elderly man.

This novel sees Merrily more isolated than usual, as her musician boyfriend, Lol, goes away on tour and her daughter, Jane, is away from home on an archaeological dig prior to going to university.  I had mixed feelings about this. It was an interesting change to show Merrily at a remove from some of her normal support network, and yet I missed Lol and Jane as they are both characters of whom I am very fond.  As a book geek, I also enjoyed the Hay on Wye setting (which brought back fond memories of a visit there when I was a student).

The Merrily Watkins novels continue to be my favourite series of mysteries and, as always, I will be waiting impatiently for the next book.  When I read the Ruth Galloway series of mysteries recently - which I briefly wrote about on this blog - I was mentally comparing them to Phil Rickman's novels, as I became very fond of the recurring characters in the Ruth Galloway series but was less satisfied by the mystery element. Phil Rickman is an excellent example of a writer who excels at both.

I've been saving these for my maternity leave. I wonder how many I can get through before the baby arrives and I never have time to read again? One down so far - review to follow - and 2nd book started today.... 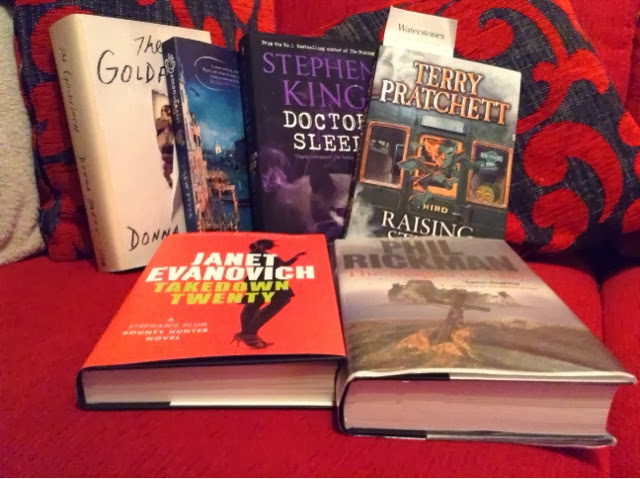 When I started writing this blog, I didn't have an aim in mind - I just wanted to get back into the habit of thinking and writing. It has evolved to be mostly about literature and books: I have challenged myself to record every book I read either with a blog review or a pithy tweet review. But I might ramble on about other stuff that takes my fancy as well...

I am currently reading